Bird watching at its finest! Hotel Cristal Ballena is a top accommodation for bird watching and wildlife holidays in the South Pacific lowlands of Costa Rica.

Explore the impressive and versatile bird and plant life in the hotel’s colorful gardens on our own jungle trail and the tropical rainforest near the Marino Ballena Maritime National Park.

Hiking on your own or booking a bird watching tour with our experienced guides provides an unforgettable experience.

For many bird and nature watchers the Hotel Cristal Ballena is a popular destination. In our own bird list we have more than 200 bird species recorded.

10 percent of the global biodiversity of birds awaits you in this small country of 51,000 square kilometers.

More than 900 bird species have been confirmed in the Official List of Birds of Costa Rica by the Costa Rican Ornithological Association. A paradise of biodiversity of birdlife.

The ornithological tourism, with photo enthusiasts and naturalists is growing every year.

Costa Rica is one of the countries with the largest number of endemic, colorful birds and their natural behavior and beautiful songs and sounds.

Birdwatching at Cristal Ballena. The versatile bird and plant life attracts many visitors.

We are proud to be part of the group of best hotels in the country for bird watching, with other eight lodges and hotels, located in the main Important Bird Areas for conservation (IBA’s) declared by BirdLife International in Costa Rica.

To be member of this select group our hotel has been subjected to strict criteria, as having a private reserve for conservation of original habitats, tourism declaration, sustainability certificate, birdwatching guide, be part of a Biological Corridor and near a National Park, offering food and beverages services, and facilities to the birders, as Handbook Bird Guides, Bird’s Checklist of the hotel and optic material. 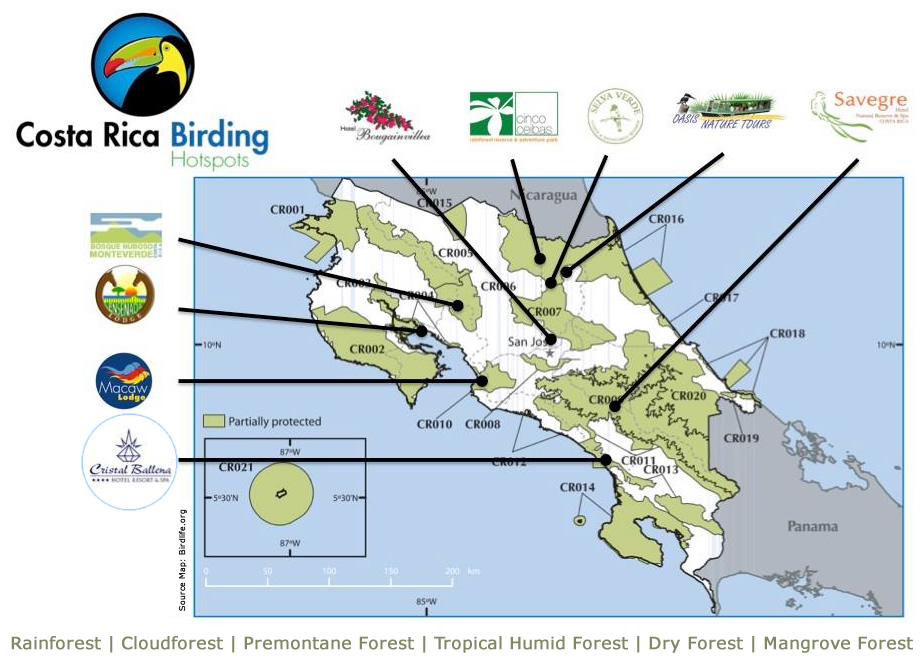 Location of the Costa Rica Birding Hotspots in the Important Bird Areas Map of BirdLife.org

Book a birding tour with a biologist guide to explore the nature around the hotel.

You can book a birding tour with us around the property of the Hotel with a biologist guide, and get to know more about the nature around you.

You will discover the trails and quiet corners of the property and the beautiful access road to the beach.

The Birding Tour at Cristal Ballena starts at 6:00 am at the reception, to ascend to the top of our hill and see the entrance to our tropical rainforest trail.

From there, since we only go down, through the hotel, we will identify the birds seen from the restaurant and around the pool, descend to the fitness’ gardens where hummingbirds and tanagers fly around, visit the river and pond of the tilapia, and discover very special spots. Afterwards, walk through the bucolic unpaved street, to let us surprise with troops of howler monkeys, and to learn more about the birds associated with the pastures and open areas.

Our walking tour will end at the entrance to Marino Ballena National Park, where we can see some marine and coastal birds such as frigates, ibis and plovers.

After two hours of walking, the vehicle Cristal Ballena pick us to offer a comfortable return to the hotel, where your buffet breakfast awaits you and your guide will prepare you the list of birds observed during the activity, wishing to for the rest of your stay you can keep adding to their particular species list.

If that is not enough, and you want to know more birds in the area, we recommend performing watching tour Bird Reserve Oro Verde, just 15 kms from the hotel, where specialized guides walk a tour surrounded by secondary forest, where you can see more elusive species like trogons, manakins, nuthatches and tinamous.

Also recommended is the birding tour at Wildlife Refuge Hacienda Baru, where over 300 species of birds have been recorded in the last 10 years.

Breakfast with toucans – what a wonderful way to start the day

In the Pura Vida restaurant is a wonderful way to start the morning with the song of the clay-colored robin (Turdus grayi) and the overflight of parrots (Amazona sp) with its rapid flutter.

If you have patience you can capture with a camera fast hummingbirds fluttering around flowers and bushes surrounding our gardens.

>> read more about the breakfast with toucans

If we’re lucky, we can enjoy the views of the Three-wattled bellbird (Procnias tricaruntulatus). These endemic birds, can only be found in Costa Rica and Panama and its sharp, metallic singing can be heard at distances of over a kilometer. Males are distinguished from females by color and especially the three strange wattles emerging from the base of his beak like a long mustache.

These birds are migratory altitude, so we can only observe a few summer months, as other many other latitudinal migratory birds visiting from America as summer tanagers and cheerful Baltimore orioles.
The scarlet macaws (Ara macao) abruptly resonate with their squawking on high. We can find them almost always in pairs, because there birds are monogamous for life, and his scarlet, yellow and blue plumage is a multicolored palette that can leave no one indifferent.

Their beauty, intelligence and longevity has put them in the eye sight of the illegal trade in endangered species protected by CITES and the Biodiversity Laws of Costa Rica. Thanks to conservation efforts by private foundations, it seems that in recent years its population is recovering.

At noon with the temperature rinsing only some birds continue active, and the rest are dedicated to look for shadow in the canopy of leafy trees surrounding Cristal Ballena which are part of the private reserve of tropical rainforest of the hotel.

Only a few brave as flycatchers, and above all, the great raptors soaring, flying over and climbing the currents of warm air without flapping around the hotel. Thus we can observe recyclers of organic matter, our green cleaning service, the famous New World vultures, or Zopilotes.

At least three species can be observed relatively frequently in the area, black vultures, residents, turkey vultures (migratories) and King Vulture (Sarcoramphus papa) also called the Central American condor for its regal and stately. Few birds in Costa Rica can reach 3 kilograms, and over 2 meter wingspan to extend their white wings.
If we got deep inside the reserve, into the tropical rainforest, other birds await us much more shy and discreet. Among them are our jumping favorites, the manakins. These small birds have an elaborate courtship dance in their breeding season, which is a delight to watch as you can see in the video below

By late afternoon, the Fiery Billed Aracaris (Pteroglossus frantzii) make their appearance in the Cecropia trees near the hotel entrance. These small toucanets, with a long colorful beak almost always have seen in the group as a small band of outlaws … and we are no less, are dedicated to feeding on eggs of other birds and small chicks, lizards and other small animals. But its undeniable beauty moves us, is that in nature there is no evil, they fulfill their function to maintain balanced ecosystems that surround us.
At nightfall a Black and White Owl fends off the little mice who dare to approach the restaurant.

He has chosen a traveler’s palm as hanger and base and he observes us with great big and curious eyes if we get close to watch him hunting.
Definitely Cristal Ballena is a paradise not only for our guests, but also for local birds.