How the hotel came to be

Living a Dream! It’s never too late to do just that. 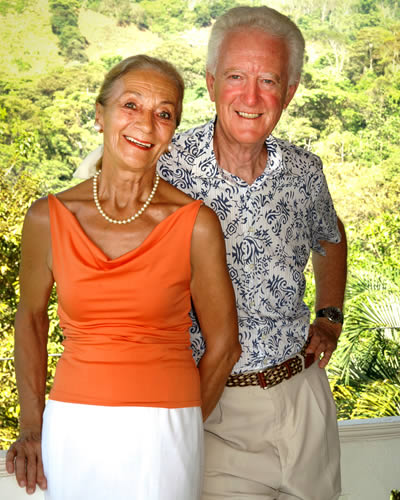 Herta and Waldemar on the veranda

Somewhere within every person, there resides a destiny, a dream, an unfulfilled life’s wish. Many, though not all, are capable of making this a reality. This, too, was the case with us. As a result, small paradises may spring to life. Paradises such as the Hotel Resort Cristal Ballena.

The Hotel Resort Cristal Ballena is a very special place for us. We gaze out over the endless waters of the Pacific. Unremittingly, the ocean waters roll up against the beach. Our eyes rest upon the sight of verdant offshore islands. The high mountains to our rear contrast with the expanses of the ocean. The plants and flowers, the warm air, the colorful butterflies, humming birds and toucans add to the tropical charm.

And in the midst of it all, our gentle hilltop paradise. Barely a few years ago, this was actually a cow pasture. 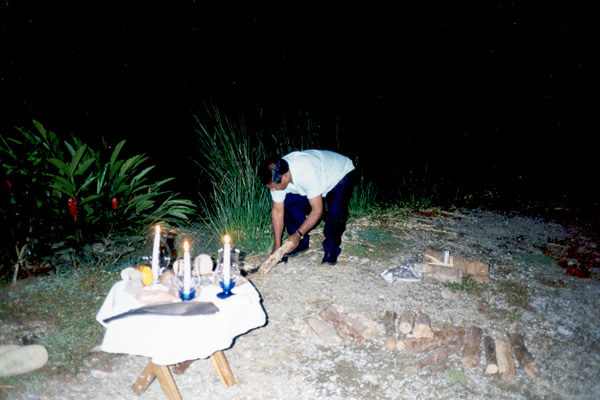 Preparing for the ceremony

Centuries before, this intersection between coast and mountains was regarded by the Indians as a sacred bastion against mountain spirits. With songs, prayers and rituals, they sought to mollify these powers. Medicine men grew healing herbs. This is, at least, the conclusion drawn by a renowned Indian professor and tribal elder on discovering the mixture of special therapeutic herbs which grow on the meadows around this hotel.

Perhaps – he opined – the Spanish conquerors violently occupied this place and put an end to the local religious practices. In a solemn ceremony, he has now returned harmony and peace to this once perhaps brutally desecrated place.

Things might have been very different, of course. We have no way of knowing. But from the very outset, we sensed that immense power and energy resided here. When, how and, above all, why did this all begin?

All questions which our friends, visitors and guests frequently ask. How do a retired lawyer and an author from Salzburg, Austria, end up putting down roots and building a hotel in the south of Costa Rica? If you happen to be in a hurry, we have a short response and an important message for you: We made our dreams reality. And it is never too late for you to do the same! For those of you who have more time to spare, we would like to tell you a slightly more detailed version of our story. 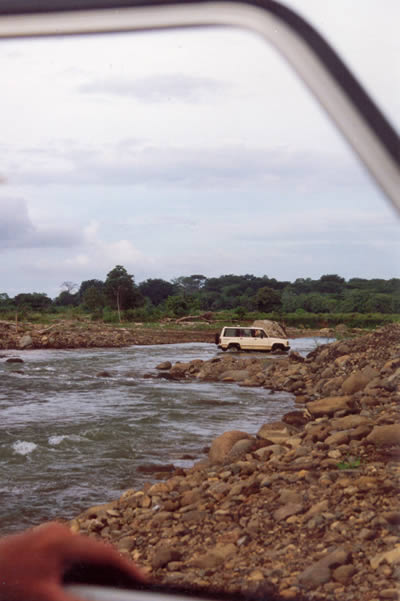 In 1992, after a conference for lawyers in the gently rolling hill country of Austria’s Southern Styria, we visited an organic farmer who was a friend of ours. Klaus convinced us to visit Costa Rica. Waldemar was reluctant at first, since he felt that everything there would be far too primitive.

But Herta was excited by aerial photographs of the land on which the Hotel Resort Cristal Ballena now stands. And this land was actually heart-shaped! Herta was convinced that this was a message to us. It was love at first sight and she simply had to acquaint herself with this region first-hand. Of course, who isn’t aware of this eternal game – the man has his reservations, the woman is excited and enthusiastic – and what happens then? At the end of 1992 we traveled, accompanied by Herta’s sister Gertrude, to Costa Rica.

It is not so long ago. But in those days, things were quite different. We had our minds prepared for an adventure and simple conditions. But to this degree? Today’s modern international airport in San José welcomed us then as little more than a small barracks. And the roads! We recall having to look for safe crossing points for our car, whenever rivers and streams flooded over the road. On two occasions, the water came as high as our windshield. Herta dauntlessly led the way on foot and piloted us through the deep water. 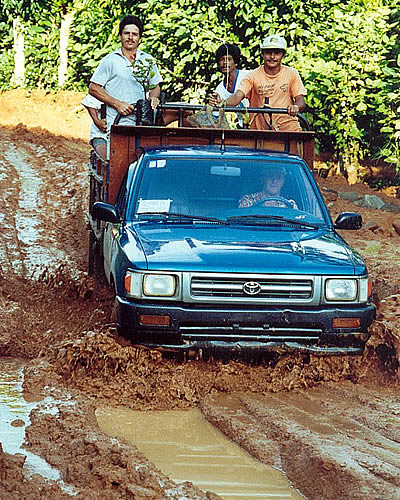 Condition of the main road during the rainy season

Finally, when the water was “only” thigh-high, did we dare to continue our drive. With that comforting shudder that always accompanies memories of dangers which have safely been weathered, we look back today on those moments of fear which suddenly overcame us, as we realized that crocodiles also inhabited those same rivers.

Our car often got stuck in potholes and mud, or was stranded due to some kind of breakdown or other. But every dark cloud has a silver lining, especially as this also introduced us to a particularly delightful aspect of Costa Rica: the friendliness and helpfulness of its people.

Without giving it a second thought, they would come by and help us out. On one occasion, when we had had a flat tire, a passing motorist pulled up, took our tools right out of our hands and changed our tires for us. Afterwards, he gave us his business card – he was actually a fellow lawyer.

The first place we stayed. Quite frankly, we had imagined it would be a little more comfortable. The hut of our friend, Klaus, which sat on the Uvita beach, provided us with a roof over our heads and sleeping mats on the sand, beneath which scurried countless little crabs. Rusty condensed water dripped from the corrugated metal roof. The toilet was over 40 yards away. There was no electricity.

But even this very, very simply life was a gift. It brought us closer to nature and the important things in life. Sun and rain, ebb and flood, day and night, as well as freshly prepared, simple foods – all grew more and more important to us. We enjoyed the daytime to the full, until nightfall arrived – which sets in early and rapidly in this part of the world – with its own unique flavor and ambiance.

We went to bed early, only to experience the freshness of the next morning. It truly was “Pura Vida”, which is how the beautiful Costa Rican salutation is expressed. Imperceptibly but steadily, we were becoming infected with the Costa Rica Virus. It would never again let us out of its grip.

Dreaming on a Jet Plane

Herta climbing the 50 ft. to the top

But we were still Salzburgers and in the midst of a “normal” life. Waldemar as a lawyer, Herta as a housewife and author. Security and affluence, what more could one possibly want? For us, this was far more than a mere rhetorical question. We truly did want more.

The prospect of an imminent “retirement” – Austrian lawyers can work until they turn seventy – was no enticement. Life must surely have more to offer!

We were open to something new.

So much more is possible than I ever dreamed I was capable of! After walking across forty feet of red-hot coals, after climbing a 50-foot-high pole and jumping from this onto a trapeze which was equally as high off the ground – and 10 feet away, you can take my word on that! It will happen! Your life’s dream is waiting for you to make it a reality.

At numerous seminars, including with the famous American motivational trainer, Anthony Robbins, we became especially appreciative of the company of people who are searching, who want to learn and to live life more intensively. One wish of ours became ever more powerful. How wonderful it must be to grow older surrounded by such positive people. In 1999, on the return flight from one of these seminars in Hawaii, we had a clear vision of our goal: The decision was made! We would build a seminar center in Costa Rica! 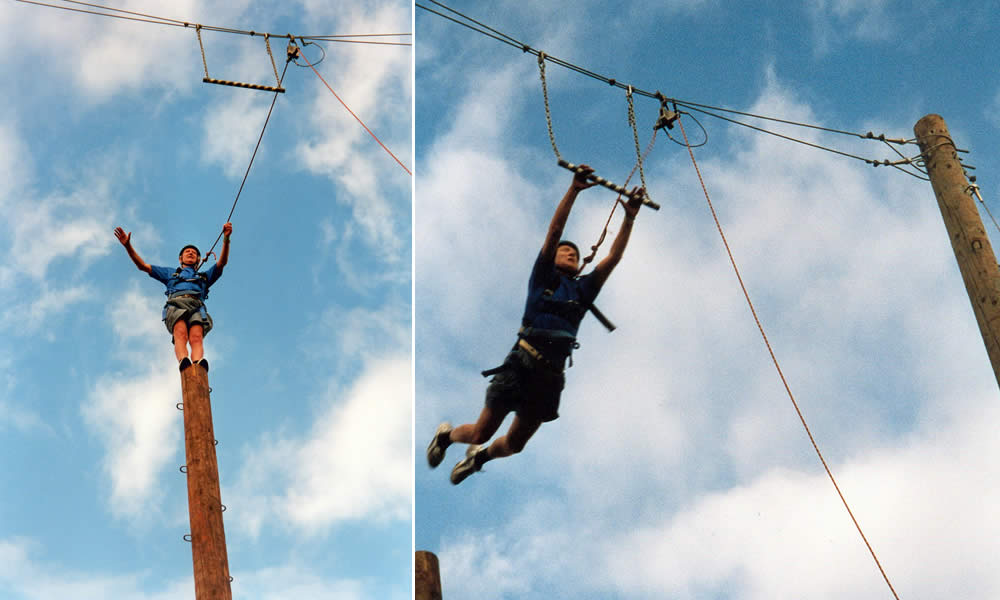 Waldemar standing atop the 50 ft . pole and jumping out onto the mid air trapeze.

The former cow pasture is a tropical garden today

We were able to open the restaurant and swimming pool back in 2002. We built our home in 2003 and, in 2004, the hotel. We have been newly crowned hoteliers since 2005. This at an age when others have long since eased their way into retirement. We had neither the training nor the experience for this third career, yet more than made up for it through an abundance of optimism, energy and the courage to turn our convictions into reality.

Every day brings new challenges to overcome, be they big or small. But this gives us an opportunity to learn so many new things – thus making this new stage of our lives a continuation of a grand adventure.

We have been delighted to add 600 trees to the area around the hotel. It has been turned into a tropical park. We are rather proud of the exotic flavor of our fan palms. We created pathways and small stopping points along the way. Take some time, stroll through the spacious grounds, while away some moments at places intended precisely for that purpose, and do nothing, except for allowing this place to work its magic on you. It truly is worth it.

The goal is not when, but how you get there 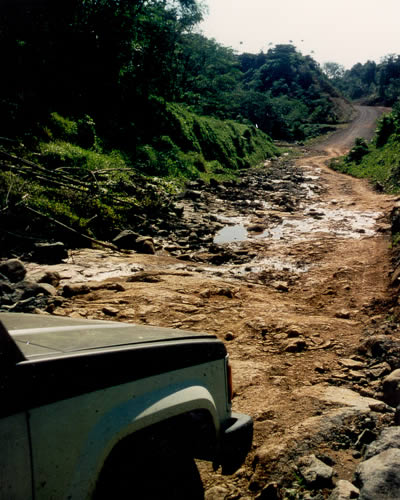 The main road before it was improved and paved

The Hotel Resort Cristal Ballena has turned out to be a beautiful hotel. Our guests feel totally at ease, which couldn’t make us any happier. A seminar center, as was originally planned, has not yet come to fruition. That will take a little longer. But it’s all about how, not when you get there. And we are always delighted to make the acquaintanceship of such open people here at our hotel. Frequently, on those languid tropical evenings, amusing, interesting and occasionally also very intense and profound conversations tend to develop.

We experience these as a wonderful enrichment of our lives and are grateful from the very bottom of our hearts.